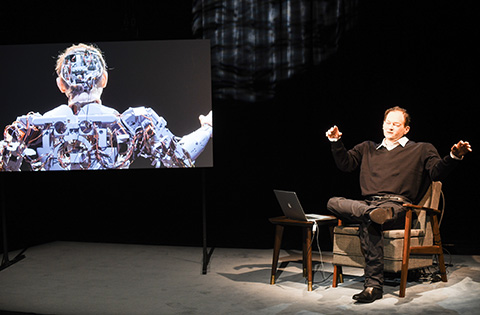 Manufacturing and Art Finish of the silicone head / coloration and hair: Tommy Opatz

In this co-production between the famous contemporary theater company Rimini Protokoll and one of the leading theatres in Germany – Münchner Kammerspiele, the human actor is replaced by a humanoid robot. Fully embracing the physical characteristics and voice of the writer Thomas Melle, it gives a one-man show that introduces viewers to the “uncanny valley.” This concept was elaborated by a Japanese professor of robotics in the early 1970s. It indicates the strange effect that android robots cause due to their resemblance to humans. They look almost like humans, but this dissolves a special and uncertain zone of experience.

The performance outlines new directions in contemporary theatrе and is a hit on international stages.